Cycling in London is a real pleasure and my favourite way to get around. However, there are close calls that remind you why people are often hesitant to travel by bike.

These moments are sometimes my fault and sometimes the driver’s fault, the important thing is to learn from them. With that in mind there’s a incident I want to share with you. I hope you’ll learn from it and I hope you’ll also share your experiences with me in the comments.

I was cycling along Euston Road in rush hour a couple of years ago, trying to make it to work on time.

A lorry was in front of me and I made a quick judgement call that I had time and space to pass.

I started to cycle on the inside of this heavy goods vehicle, but being in the blind spot, the driver hadn’t seen me and so started to move into my path. I almost instantly found myself in a tiny gap between the enormous wheels and the railings on the left of the road.

My handlebars wobbled and I could see how close I was to clipping those wheels. I applied the brakes and fortunately the lorry narrowly skimmed passed me.

Shaken by the incident I pulled up at the side of the road to catch my breath.

I am aware that things could have been very different and I had a lucky escape. In the last few years there have been a large number of cyclist deaths from collisions with lorries – 104 in the last 5 years in the UK. Further, 94% of fatal cyclist collisions with lorries between 2008-2014 in London occurred on the front left side, exactly where I narrowly avoided getting hit.

Who was at fault?

It is easy to try to blame someone for the situation I found myself in. The lorry driver should know I was alongside him and not try to cut into another lane. The car behind should have given me space to pull back. I do have to shoulder some of the responsibility too. Squeezing past traffic and riding along the inside of the lorry, I was putting myself in a potentially dangerous situation. 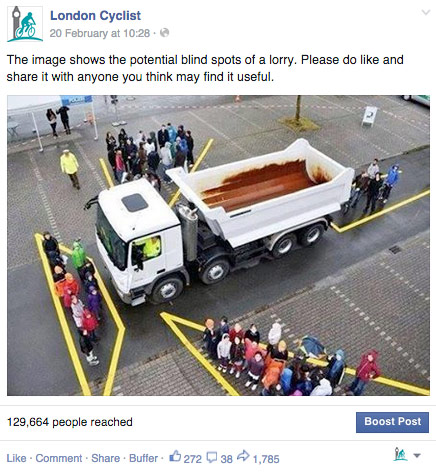 In the last year there has been a rising awareness of the size of a lorry’s blind spot – the area alongside the vehicle which is unseen by the driver using standard mirrors. Lorries driving in London are now required to have extra mirrors which substantially decrease the blind spot, but they cannot remove it completely and it’s tough for drivers to consult all the mirrors at the same time.

What can you do?

There are several ways to avoid getting into such a terrifying situation.

Avoid going up the inside of a lorry or other large vehicle when it is stopped at a red light. Even if it is going straight on you may run out of room, and if it is turning left it could be disastrous. The little bit of time you may save on your journey is not worth the risk of getting crushed.

Secondly, a lorry has quite a large blind spot behind and in front of it. You may think you will accelerate away from the lights quicker than the vehicle, which may be true, but you are not in complete control of the situation, someone may get in your way or the lorry may move off before you. Therefore, you should wait and let the lorry go first at a left hand turn to avoid a potential collision.

It is worth considering taking a cycle training course, even if you are a regular cyclist. I have taken one and it was very useful. In my case, I found I had developed a few bad habits. I was also reminded that I should be 1 metre way from the kerb and to stay out of the door zone of parked cars, another common place for accidents to occur on London’s roads.

Many people are eligible for free one-to-one cycle training. You can find out who to contact in your borough by checking on the TfL website or looking at Cycle Confident.

There is a program running at the moment by the Met police to provide lorry drivers with cycle training so they are more aware of cyclists on the road. A part of this also involves cyclists sitting inside a lorry cab to see the blind spots and mirrors for themselves.

I have done this and it’s pretty alarming. The new mirrors certainly help increase visibility but there are still substantial areas around the vehicle that cannot be visualised. There are also an alarming number of things to check and look at and the mirrors are not very large.

From this experience, I’ve found a new understanding of how hard driving such a large vehicle through London traffic must be.

Avoiding lorries seems to be the best bet for staying safe. Don’t try to squeeze past them, even if you see another cyclist doing it.

I typically also try to avoid roads such as the Euston Road. There are other great cycle routes and quiet roads in London.

For more tips and advice, check out our comprehensive safe cycling guide!

This site uses Akismet to reduce spam. Learn how your comment data is processed.

Repair your bike, track your cycling and find the nearest London bike shop - all from your iPhone: